For over two decades 360 degree feedback has been used as an effective tool to provide honest, accurate feedback to staff members, predominantly in senior management and leadership positions, about their behaviour.  Advocates of 360 degree feedback point to the benefits of gathering multi-rater feedback about an individual’s contribution to the organization in terms of their job skill, performance in role and working relationships versus traditional line manager only appraisal methods.

“The 360° feedback has been linked to several positive outcomes like improved performance, better interpersonal communication and smoother work relationships”

Research highlights that usage of 360 degree feedback has increased in the last five years and is being used at all levels within the organization rather than being the preserve of senior leaders (Expert Training Systems, 2015).  It should however, be noted that no two 360 degree systems are the same and this diversity is driven by organizational constraints, resources and goals.

Newbold (2013) identified a number of issues that are common in the execution of 360 degree feedback such as ineffective design of the process, including problems with questionnaire design, lack of participant briefings, poor quality or difficult to use feedback tool and ineffective administration all of which contribute to low completion rates.  Other issues revolve around the feedback report, including the way that feedback is delivered, lack of support and absence of accountability in ensuring the recipient does do something constructive with their feedback.  It is interesting to note that many of the recent trends in 360 degree feedback seemingly address these issues directly.

Research by 3D Group (2013) shows that the use of 360 degree feedback is now used for developing employees at all levels, extending beyond traditional recipients such as senior management and leadership groups.  There is also growth in the use of comparisons to previous years scores.  These results suggest that 360 degree feedback is being incorporated as an on-going people development process.  However, other research shows that rather than being a fixed annual or periodic process, 36% of organizations are using 360 degree feedback on an ad-hoc project basis (Expert Training Systems, 2015).  Also, Shipper (2010) noted that it was better if 360 degree feedback was provided as an ongoing process and not a “one-shot program.”

Regardless of the frequency of use, trust in the process is important, and feedback from raters is considered to be more honest if it is used exclusively for professional development. Literature indicates that ratings may be tainted by bias if results affect a recipient’s position or benefits.  However, when 360 degree feedback is used for developmental purposes only, the recipient takes ownership of the feedback and will self-direct development decisions. (Asumeng, 2013)

“The fact is that many organizations are already successfully using 360 feedback as part of their performance management systems, as well as for other personnel decisions such as staffing, succession planning and high potential selection and development.”

Utilizing information from 360 degree feedback for HR decision making can contribute to perceptions of fairer decision-making, greater accountability from recipients, credibility of promotion and pay decisions and horizontal alignment of HR practices which can result in delivering a longer term goal of organizational effectiveness. 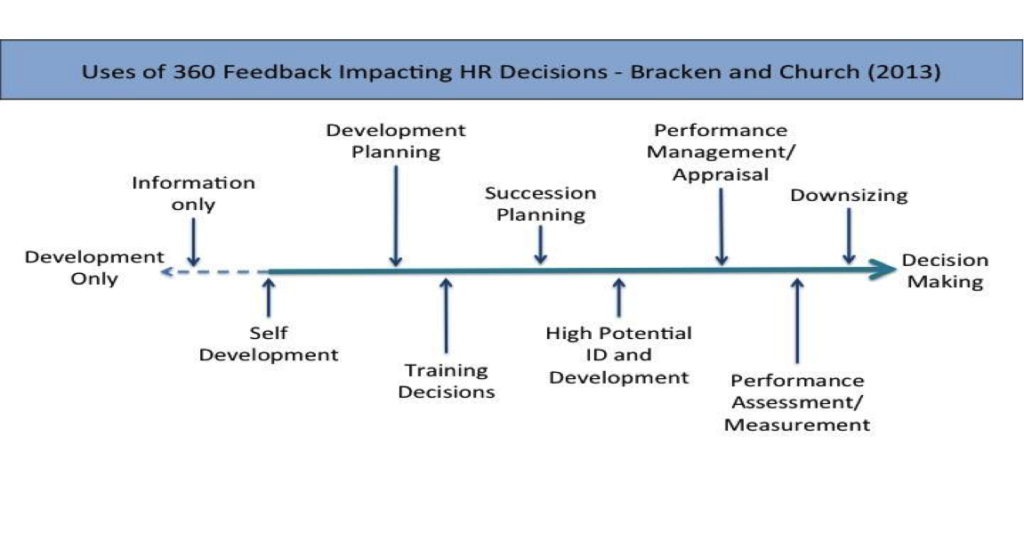 Principles of good practice seem to be increasingly embedded in the design of 360 degree feedback processes.  Research shows that surveys are getting shorter, the number of raters is increasing and there is an increased use of graphics in feedback reports. The five point scale has become industry standard (85%) and taking into account individuals who may not have online access there is a shift to include both paper and online survey versions (3D Group, 2013).

Recognition is growing of the need for rater training to increase their understanding of the purpose and process of 360 degree feedback, which should also reduce rater errors and biases.  It is highlighted that it is popular to include guided explanatory text in the multi-rater survey, although in person training is increasing including group briefings, video conferences or webinars.

A significant shift in 360 degree feedback design is linked to the anonymity of raters.   The research by 3D Group (2013) shows that 52% of organizations surveyed say rater anonymity is essential but a growing number of organizations are now incorporating some attributed feedback within 360 reports rather than it being strictly anonymous (Expert Training Systems, 2015).

The importance of anonymity is linked to the obvious impact on raters willingness to give honest feedback if they know it will be attributable and, the influence on how recipients view the result if they know who provided the feedback.  Further research will be needed in understanding the impact of moving away from anonymity of raters on the effectiveness of 360 degree feedback and the outcomes of the professional development of the recipient.

Web based reporting tools have improved the analysis of data, offering concise, self-explanatory feedback reports which are simple to understand. Organizations use a mixture of internal administration, external consultancies and recipient led generation of reports.  The benefits of using outside vendors include the assurance of objectivity, anonymity and confidentiality.

A helpful feedback report will utilize the improvements in visual graphics offered by 360 degree feedback software programs, which highlight key findings and make it easy to interpret patterns from the data.  It is good practice to provide recipients with guidance and support to enable them to make sense of their feedback report and understand what actions they can take to respond to the feedback they have received.

There is expansive literature relating to the importance of organizational support of the 360 degree feedback process and creating a supportive environment alongside activities that offer recipients a variety of development opportunities when receiving their feedback report.

“Benefits included information to deal with a particular difficult or uncertain situation, and learning for skill development to increase efficacy for job improvement.”

Whatever the support offered in receiving the feedback report, it is the activities that follow that are perhaps more important than the feedback with 70% of 360 degree feedback results being used to inform personal development plans (Expert Training Systems, 2015).

SelfStir 360 degree feedback tool has been designed to be flexible offering a solution which can be used for adhoc projects, as part of an annual or bi-annual performance appraisal system or more regularly.  It can support 360 degree feedback for a single individual, a team, a department or organization wide.  The system can be driven by HR, an OD champion or owned by the individual. The feedback reports are integrated with self-development planning tools and the data analytics dashboard offers HR a smart online platform, which can integrate with talent programmes or training and development plans.

SelfStir can support 360 degree feedback, 180 degree feedback, manager reviews and/or self-assessments which is targeted at any size of cohort, at any level within the organization: executives, managers, all employees or individual contributors. The system is designed to be self-driven and/or programme led.  The individual is able to share their feedback report with colleagues, managers, coaches or mentors.  HR can access the visual data analytics for decision-making purposes.

SelfStir can be used whenever the organization or individual perceives a need for feedback and can also support a pre-determined feedback schedule.  The tool is easy to set up to run more frequently, offering a system, which can compare feedback and be used as a continuous feedback tool.  The system has been designed to be easy to use, and intuitive and offers a shorter and responsive 360 degree feedback process.

SelfStir offers a comprehensive system, which includes a range of survey competencies, which can be adopted complimentary for use. Alternatively the system can be easily tailored to fit in with your organization’s own competency questions.  SelfStir offers complete flexibility making it easy to coordinate within the constraints, resources and goals of your organization.